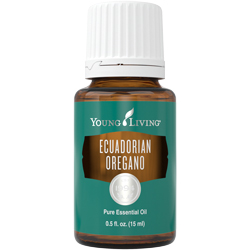 PRODUCT BACKGROUND
The story of this unique essential oil starts in Ecuador, where Young Living Founder D. Gary Young came across a hardy, semi-succulent that produced a surprising amount of essential oil. Its aroma was similar to many oregano species with a moderately high carvacrol content. Ecuadorian Oregano (Plectranthus amboinicus) is thought to be originally from Africa but has spread throughout the world. As such, it has many common English names like Mexican mint, Spanish thyme, Indian mint, French thyme, Mexican thyme, Cuban oregano, and Three-in-one herb. Another way to identify this oil is by its common and former scientific synonyms, which are: Coleus amboinicus, Coleus aromaticus, and Plectranthus aromaticus.
JOINED THE YOUNG LIVING FAMILY IN 2020

APPLICATIONS
EXPERIENCE
Soft, herbaceous, oregano-like aroma. Includes the constituents of carvacrol, gamma terpinene, and para-cymene .
LABEL DIRECTIONS
Topical: Dilute 1 drop with 4 drops of V-6™ Vegetable Oil Complex or olive oil. Test on small area of skin on underside of arm. Apply to desired area as needed
Aromatic: Diffuse up to 10 minutes 3 times daily.
CAUTIONS: Keep out of reach of children. For external use only. Keep away from eyes and mucous membranes. If you are pregnant, nursing, taking medication, or have a medical condition, consult a health care professional prior to use.

Discover the large variety of products for your healthy home and body that Young Living sells. END_OF_DOCUMENT_TOKEN_TO_BE_REPLACED

Young Living has an entire line of Essential Oils that can be safely used for your pets. Dogs, horses, cats and cows alike can benefit from YLEO END_OF_DOCUMENT_TOKEN_TO_BE_REPLACED

END_OF_DOCUMENT_TOKEN_TO_BE_REPLACED

Learn what's included in the Thieves starter kit, and how it will help your healthy home. END_OF_DOCUMENT_TOKEN_TO_BE_REPLACED

You’re heading over to YoungLiving.com

All orders are handled directly by Young Living, but if you have questions, we’re here to help.